Black Seafarers And Pirates That Conquered The Seas While Making History

Seafarer: a person who regularly travels by sea; a sailor. While history would often have us believe that the most notable sailors, pirates and seamen were non-Black— we are here to show otherwise.

Did you know that June 25th is the International Day of the Seafarer? In 2010, the International Maritime Organization launched this day in recognition of the contributions that seafarers past and present have made to the world. The day also recognizes the great risk involved in being a professional seafarer; oftentimes, the positive contributions that seafarers have made to our societies, be they economic or social, have come at great personal cost.

Ahead of next month’s International Day of Seafarers, and in the travel spirit as borders begin to reopen worldwide, London-based blogger Fayida Jailer schools us on some Black intrepid seafarers from history. 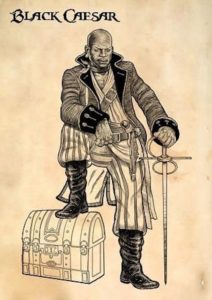 When it comes to famous pirates, we’ve all heard of Black Beard and Captain Morgan, but have you heard of Black Caesar? He was an 18th century African pirate, best known for enjoying a successful pirating career before serving alongside the legendary Captain Black Beard.

Although there is little surviving evidence of his life, according to the legend, Black Caesar was said to have amassed a vast amount of wealth which he kept hidden on various islands.

It’s unknown exactly when he was born, but the most popular account of his life states that he was born on the continent of Africa and was said to be a fierce war chieftain, renowned for his strength and intelligence.

Caesar was eventually kidnapped, enslaved, and held captive onboard a ship. As the ship approached the coast of Florida in North America, a hurricane threatened to destroy the vessel and kill all onboard. One of the sailors freed Caesar, and together they seized the opportunity to make their escape. Grabbing arms and supplies, Caesar and the sailor boarded one of the longboats and were eventually washed ashore.

Thus, Caesar’s pirating career began. He and his companion would sail out on lifeboats and pose as shipwrecked sailors, luring passing ships into taking pity on them and stopping to offer assistance. Black Caesar and the sailor would then hold the ship at gunpoint and demand they hand over their supplies and ammunition.

This gruesome partnership came to an abrupt end, and over what? You guessed it… a woman. Eventually, Caesar and his sailor companion had a disagreement over a woman they had brought back to their island, and Caesar killed his friend in a duel.

Undeterred, Caesar began recruiting more pirates who expanded their pirating operations to ambush ships at sea. They developed an intricate way of evading capture by retreating into a nearby creek or mangrove and submerging their boat in water until the patrol ships had passed. Black Caesar was said to be a cruel and ruthless man, creating prison camps for his captives, for whom he left no supplies when he went out on pirating missions. These raids continued for many years, bringing Black Caesar a significant amount of treasure.

In the early 18th century, Black Caesar was said to have joined forces with Blackbeard and served as a lieutenant on his ship, the infamous Queen Anne’s Revenge. Caesar was present when Blackbeard was famously killed by the English Lieutenant Robert Maynard. Black Caesar was subsequently taken prisoner, charged with piracy and hanged in Virginia in 1718. Braithwaite was not only a skilled sailor but an activist, Pan-Africanist, socialist and trade-unionist who campaigned for Black and Asian seafarers’ rights. He was mainly active in Britain during the inter-war period, though his story begins much earlier, in the Caribbean.

Born in Barbados in 1885, Chris Braithwaite first began his seafaring career as a teenager when he joined the British Merchant Navy. This allowed Chris to sail around the world before he decided to settle in Chicago and raise a family.

Chris re-joined the navy in order to fight in World War I, after which he lived in New York before relocating to London. In London, Chris married a second time, this time to a woman named Edna with whom he had six children.

Chris went on to join the National Union of Seamen, and in 1931 joined the Communist Party of Great Britain. Concerned that his association with the Communist Party would further restrict his labor rights, Chris operated under the name ‘Chris Jones’.

Chris was not just a socialist and a trade-unionist but also a Pan-Africanist. He was instrumental in launching the Negro Welfare Association, a 1930s Black British organization that campaigned for racial equality and civil rights.

In 1935 Chris founded the Colonial Seamen’s Association which lobbied for the rights of Black and Asian seamen. He also acted as secretary for the International African Service Bureau, established in 1937, and for their journal he wrote a monthly column called ‘Seamen’s Notes’. Chris worked hard to ensure that the IASB publication was distributed throughout an international network of seafarers, reaching all the way to the continent of Africa.

Chris Braithwaite’s prolific career came to an end in 1944 when he died suddenly from pneumonia. In a touching final tribute, Black seafarers carried his coffin from his home in Stepney, London, all the way to his grave. Fellow activist George Padmore noted that Braithwaite’s death was ‘a great loss to the cause of the colonial peoples’ and he further said that Chris’ memory would ‘long remain as a symbol of the hopes and aspirations of his race’.

Braithwaite is remembered to this day as someone who campaigned throughout his life for equal rights for Black and ethnic minority seamen, and for the Black community as a whole. Courtesy of US Navy

Howard was born at an Air Force base in California in 1960, the daughter of an Air Force master Sergeant. When she entered the United States Naval Academy in Maryland in 1978, she was one of only seven Black women in the class, out of a cohort of 1,363. She graduated from the academy in 1982, and went on to embark on an illustrious naval career, as made clear by her many achievements and awards.

Howard was concurrently the commander of United States Naval Forces in both Europe and Africa before retiring in 2017, after almost 36 years serving in the US Navy.

Following her retirement, she went on to teach cybersecurity and international policy at George Washington University. She has also worked alongside President Joe Biden.

Michelle has won multiple awards for her leadership, her career in the military and her contributions to STEM. She continues to inspire with her example and her teachings!.

If you liked that then check out Fayida’s platform, Freedom Is Mine where she teaches Black history from across the African diaspora. You can find her on YouTube and Instagram posting daily Black history content